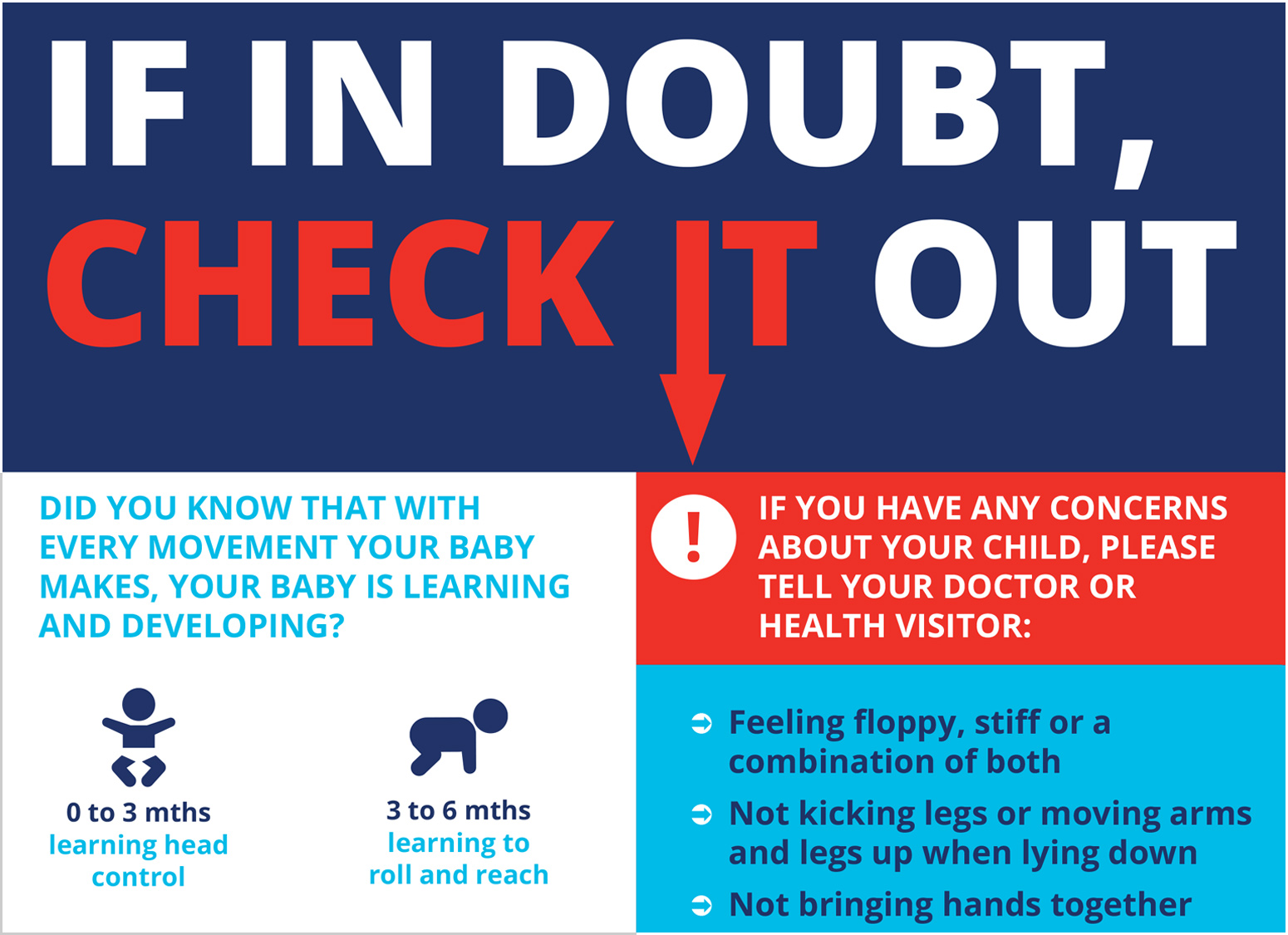 Cerebral Palsy is the most common cause of lifelong disability starting in infancy. Despite this, there are often unnecessary delays in the early identification and referral of infants, which, in turn, prevents effective early intervention treatments taking place at the time when they can be the most impactful. A key reason for this is a lack of awareness of the early signs of cerebral palsy amongst the general public and some primary healthcare professionals.

Approximately 1,800 children a year will receive a diagnosis of cerebral palsy, which is roughly 1 in 400 children. Of these children, we know that approximately 50% will have been “high-risk” babies discharged from special care baby units and will therefore have been monitored by follow up services and unfortunately go on to be diagnosed with cerebral palsy. However, the remaining 50% who were not known or believed to be at risk of having cerebral palsy from birth often go undetected because parents and first line health practitioners are unaware of the signs of cerebral palsy. The impact of COVID-19 on our community of children and young people with or at risk of cerebral palsy has only exacerbated this problem of delayed intervention and will have lasting implications for many of these children’s long-term prospects. COVID restrictions have meant that many GPs and Health Visitors are not seeing babies face to face, which affects the professionals’ ability to instantly detect an abnormality, and coupled with new parents not having access to their wider support network, means that even more babies who are displaying the warning signs of cerebral palsy are going undetected at a point when early intervention can have a positive impact on that child’s future outcomes.

There is now a substantial body of evidence showing that identification and intervention at the earliest opportunity provides the infant at risk of cerebral palsy with the best possible outcomes in terms of future progress and independence. By raising awareness in those key early signposters that highlights signs to be concerned as well as the critical importance of early intervention and ongoing intensive intervention, this could have a significant and highly beneficial impact on the life chances of young children with or at risk of cerebral palsy

The Awareness Campaign strapline: If In Doubt, Check it Out will help parents to understand key milestones for motor development at each age and stage from birth to 3 years old, as well as encouraging them to speak with their GP or Health Visitor if they have any concerns. The aim is to ensure that children with movement delay or disorders to not ‘slip through the net’ as a result of ignorance of the signs or a ‘wait and see’ attitude. Posters featuring this key message and Parent Information Leaflets have been sent to GP surgeries and shared via a social media campaign.

The poster and parent information leaflet for this campaign have been accredited by the Institute of Health Visiting, and the campaign has been funded by Action Cerebral Palsy and a number of trusts and foundations, including the Barbara Ward Children’s Foundation, the Brian Murtagh Charitable Trust, the Childwick Trust and the Souter Charitable Trust.

In the words of Dr Helen Hunt, a medical doctor and mother of Wilf who has four limb cerebral palsy,

“Wilf was diagnosed with cerebral palsy at 16 months. It is only with hindsight that I am able to look back on that day and articulate what felt so wrong with the delivery of his diagnosis. To make it worse, I was then told both his physiotherapist and paediatrician had suspected Wilf had cerebral palsy for some time. Why on Earth did they not tell me sooner? I’m a proactive parent, and had I known that the “golden years” for making the greatest difference to my child’s outcomes were the first three years, I would have got researching as fast as I possibly could to find more effective services.”